There are now nine different commercial van nameplates available in North America. The latest addition to the fleet is Chrysler’s Ram ProMaster, a Fiat-based import which promises to sell far more than nine copies per month in the very near future.

The GMC Savana was Canada’s top-selling commercial van in September. With the September, decline of the Ford E-Series and Ford Transit Connect, the Savana and its GM twin from Chevrolet, the Express, owned 45.7% of the commercial van market. 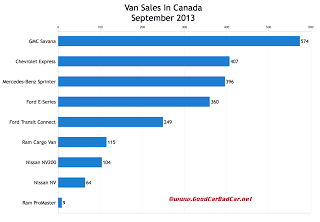 Mercedes-Benz Canada hasn’t sold this many Sprinter vans since November of last year, when 405 new Sprinters were registered in Canada. The 396 units represent a 47% year-over-year increase, a YOY improvement bettered only by the top-selling Savana. Nissan’s smaller NV200 outsold the bigger NV for the second time.

You can click any model name in the table below to find historical monthly and yearly Canadian auto sales data. You can also select a make and model at GCBC’s Sales Stats page. This table is now sortable, so you can rank commercial vans any which way you like. Suggestions on how GCBC should break down segments can be passed on through the Contact page.