GM Canada’s market share in the commercial van segment rose from 28.8% in October 2012 to 37.7% in October 2013. The GMC Savana took over from the Ford E-Series as the best-selling commercial van in Canada, although the E-Series’ year-to-date lead over the GMC, at 2766 units, is secure with just two months remaining. 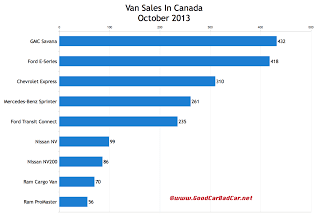 Ford’s market share in the commercial van category slid from 41.9% a year ago to 33.2% in October 2013. Through ten months, Ford, GM, and Chrysler – the latter of which now offers two commercial vans – own 82.8% of the market for commercial vans in Canada.

Look for an all-new Transit Connect and a larger E-Series-replacing Transit to shake up the market in 2014.

You can click any model name in the tables below to find historical monthly and yearly Canadian auto sales data. You can also select a make and model at GCBC’s Sales Stats page. This table is now sortable, so you can rank commercial vans any which way you like. Suggestions on how GCBC should break down segments can be passed on through the Contact page. The + icon has been removed from year-over-year improvements. Look instead for red font to designate year-over-year declines. We’ve also added prior year data so you won’t have to hunt around for historical figures.