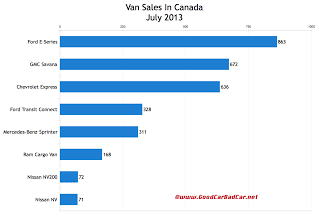 Perhaps of greater noteworthiness in July was the Nissan NV200’s ability to outsell its more established big brother, the NV. Of course, the NV200 only outsold the NV by a single unit. And rather obviously, the NV200’s increase only makes it the second-worst-selling commercial van in Canada.

Indeed, the NV200 and NV combined don’t sell as often as the next-lowest-volume commercial van in Canada, the Ram C/V.

Through the first seven months of 2013, the Ford E-Series’ lead over the second-ranked GMC Savana is measured at 2671 units.

You can click any model name in the tables below to find historical monthly and yearly Canadian sales data. You can also select a make and model at GCBC’s Sales Stats page. This table is now sortable, so you can rank commercial vans any which way you like. Suggestions on how GCBC should break down segments can be passed on through the Contact page.