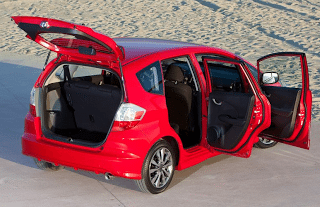 Canada’s new vehicle market shrunk by 4% compared with August, but September 2011 sales of the Honda Civic were 54% stronger than August’s 3073-unit performance. Admittedly, year-over-year, sales of the new 2012 Honda Civic tanked, down 21% from September 2010’s 5972 sales. But there’s something to be said for deals – previously unheard of ridiculously good deals – that had customers driving away from Honda dealerships in Si-trim Civics they’d leased for less than the cost of a mid-range Honda Fit.

Speaking of the Fit, year-over-year sales plunged 32%. From August, Fit sales dropped 25%. For every Fit sold in Canada last month, 18 Civics were sold. In the United States, Honda sold fewer than three Civics for every Fit.

Sales of the 2012 Chevrolet Sonic began in Canada in the latter part of September. Of the 557 Chevrolet subcompacts sold last month only 55 were Sonics. Aveo sales were down 11% as its death neared. Compared to the Cobalt’s 2875 September 2010 sales, Cruze sales were down 24%. Elsewhere among domestics, Ford Focus sales rose 41%, the Dodge Caliber was down 70%, and sales of the Fiat 500 (sold in Chrysler dealers) reached 508. The Fiat wasn’t on sale at this point last year, but compared with August, sales of the Cinquecento slid 18%. 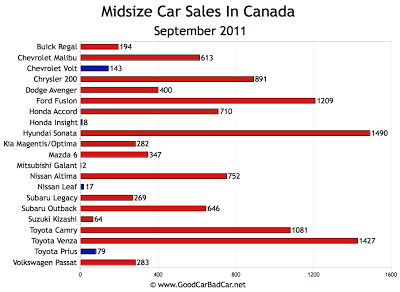 Sales of the crossoverish Toyota Venza nearly topped all rival sedans in September 2011. If only the Hyundai Sonata hadn’t posted a 25% jump. Venza sales were up 10%. Sales of the Toyota Camry rose 58%. Canada’s year-to-date midsize leader is the Ford Fusion, but September Fusion sales dipped 21%. Combined, the Chrysler 200 and Dodge Avenger found 1291 buyers last month. The 200 was up 782% on the September totals of its predecessor, the Chrysler Sebring. Avenger sales shot up 535%.
Don’t let the Camry’s vastly improved sales volume fool you into believing all was well among Japan’s most famous midsize nameplates. Nissan Altima sales fell 55%; the Honda Accord was down 31%. Through nine months the Accord is off 2010’s pace by 32%.
Suzuki Kizashi sales were down 20%. The Subaru Legacy was down 13%. Outback sales improved by 25% for Subaru. If you’re of the belief that the Toyota Venza and Subaru Outback should be compared with SUVs, check out this post. 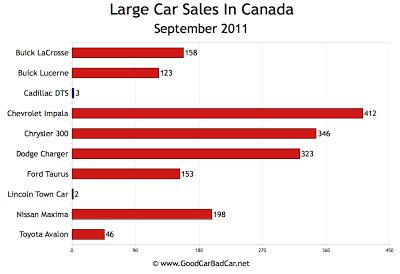 Rarely are mainstream-badged large cars the story in Canada’s monthly auto sales recap. September was no different from the norm. Although Chrysler 300 sales were booming (relative to 300 sales in the past), the 76% gains only took the big Chrysler up to 346 units. Dodge Charger sales were up 7% in September but are down 16% year-to-date. On that note, sales of the Chrysler 300 are down 38% through three quarters.
Ford Taurus sales tumbled 44% in September. The Buick LaCrosse was down, somewhat astonishingly, 60%. Sales of the defunct Lucerne dropped 24%. The less expensive Chevrolet Impala reported a 42% decline. Nissan Maxima sales plunged 49% last month. The Toyota Avalon was down 21% from 58 to 46. These simply aren’t the cars Canadians want. Unless they’re renting for the weekend. Still, let’s be honest, they’re probably going to choose a Ford Escape over a Dodge Charger.