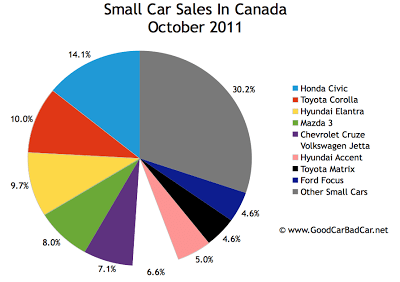 Hyundai Canada dealers took advantage of decent Hyundai Accent supply to post a 50% jump in Accent sales in October 2011, even as the newer 2012 Kia Rio and 2012 Chevrolet Sonic trickle in to dealerships. Chevrolet sold 392 Sonics in October; Kia sold 472 Rios.

For the gorgeous and well-equipped Rio, life isn’t easy. Slightly more expensive and slightly roomier, the Kia Soul surely attracts many potential Rio buyers. Those looking for a conservative choice can opt for the more conventional Forte, another small Kia that’s not that much of a stretch for the typical Rio buyer.

Over at Chevrolet, the Cruze has a base price only $500 above that of the Sonic. Not surprisingly then, Chevy compact sales were 3.2 times stronger than sales of Chevy subcompacts. Keep in mind, the Cruze’s 673% year-over-year jump is artificially inflated. Last October, Chevrolet sold 2686 Cobalts and Cruzes, so you could say sales slid 6% in October 2011.

75% of Canada’s 20 best-selling cars can be found in the first table below. Knowing that the Honda Civic is Canada’s best-selling car makes it fairly easy to understand that the Civic is Canada’s best-selling small car, despite a 17% October decline. As the market share chart shows up top, 14% of October’s Canadian sales in this hard-to-define segment were Civics. More than one third of all small cars sold in Canada last month were either Civics, Toyota Corollas, Mazda 3s, or Toyota Matrices.

For info on Canadian midsize car sales and Canadian large car sales, keep scrolling or click past the jump.

Of the 19 cars in the table below which had the potential to lose half of October 2010’s volume last month, four did so. The Honda Accord was Canada’s tenth-worst-selling vehicle in October 2011. Honda Insight sales fell off a cliff – one could say Honda Canada pushed the Insight off a cliff given the company’s lack of support for the car in Canada. The dead Mitsubishi Galant dropped 78%. The Nissan Altima was down 54% from October 2010’s 1222 sales. We might as well include the Chevrolet Malibu in the mix. As dealers wait for the all-new Malibu, sales fell 47%.

While many prefer to consider the Toyota Venza a crossover or even an SUV, it’s Camry wagonesque ways land it in the midsize car sales chart here on GoodCarBadCar.net. Whether you agree with this placement or not, you can’t deny the Venza out-sold all the other vehicles in this midsize group, beating its nearest competitor, the Ford Fusion, by 116 sales. Note the addition of Toyota Prius V sales figures in this month’s list before scrolling down to the large car sales section. 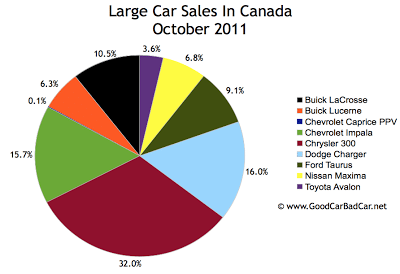 It appears as though October was the month for Chrysler’s new 300 to finally find willing buyers. Sales jumped 127%, but because of the 300’s troubles gettin’ goin’, sales are down 27% through ten months. The 300’s platform partner, Dodge’s Charger, also had a good month, rising 110% to pass the falling Chevrolet Impala.

Other than the new-to-market-fleet-only Chevrolet Caprice, every car in this chart has posted falling sales through the first ten months of 2011. Yes, that goes for the Buick Lucerne, too. Although round numbers allow the now-defunct Lucerne to post level sales, the big Buick is down by eight units this year.