The Honda Civic was more than twice as popular as any other new car on sale in Canada in January 2012. Its number one competitor, the Hyundai Elantra, finished 2540 sales behind the Civic. 473 of the Elantras sold in Canada last month were Elantra Tourings, sales of which rose 21%. Elantra sedan sales were down 15% in January. 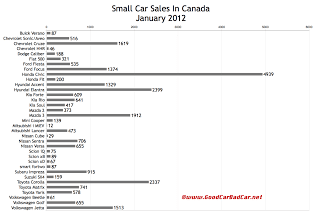 47 of the Chevrolet Sonic/Aveo’s 516 sales were of the old guard Aveo variety. 94 of the 321 Fiat 500s sold were cabriolets. Toyota Yaris sales reached 578 in January 2012 – 476 of those sales were hatchbacks. 79 of the Golfs sold were GTIs. You can read how those 79 sales compare with the sales achievements of other sporting machines here. Predictably, Scion iQ sales were much better in its second month on sale than in December, an eight-unit month. Will January be the last time the smart fortwo holds off the iQ? There was only a 12-unit difference.

The Toyota Camry sold about once for every five Civics but it was January’s leader among mainstream midsize cars in Canada. 164 of the 1007 Camrys sold were hybrids. For every 6.5 Prius V sales, there was one regular Prius sold. Kia and Hyundai want to be treated separately, and that’s fair, but if you put the Sonata and Optima together, the corporation had 1137 midsize sales off the same platform. That’s winning material. Granted, Toyota sold 791 Venzas, so you could tell Hyundai/Kia to add those to the Camry’s pipe and smoke it.

Large cars are often ignored in Canada, but there were a few that performed especially well in January. The Dodge Charger and Chrysler 300 were up 316% and 260%, respectively, with a combined sales total of 1127. The Ford Taurus and Buick LaCrosse? To put it simply, they were way less popular. To be honest, fleet sales play a huge role in this category and assigning desirability quotients to these sales figures would be a pointless exercise.

Specific year-over-year numbers and accompanying enlargeable charts are available for dozens of cars after the jump. Monthly and yearly data on all these models and every nameplate currently on sale can be accessed through the dropdown menu at the top right of this page or at GoodCarBadCar’s Sales Stats home. 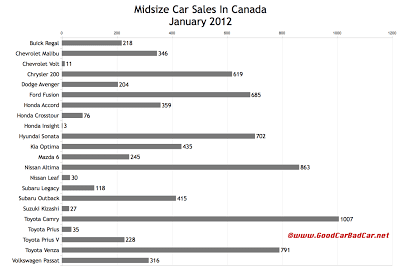 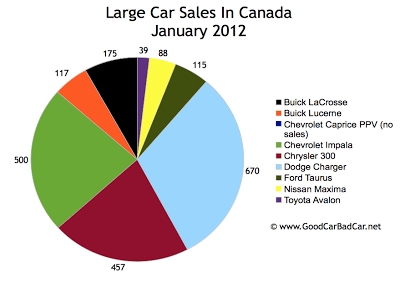