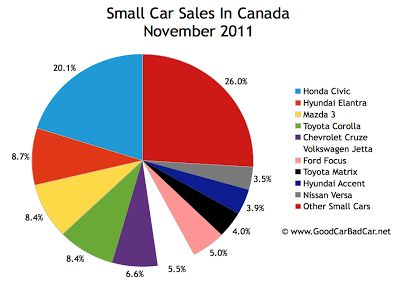 The Honda Civic, Canada’s best-selling car and best-selling vehicle overall, finished November 2011 with a 68% improvement over November 2010’s total. The Civic’s nearest competitor, Hyundai’s Elantra, is 6570 sales behind the Civic with only one month remaining. One out of every five cars sold in November in the loosely-defined small car segment were Civics. In fact, the Civic represented 5.6% of all new vehicle sales in Canada last month.

Combined as they are in the United States, the Toyota Corolla and Toyota Matrix would be 47,970 sales strong through the first eleven months of 2011. That total is better than the Elantra’s but not as good as the Civic’s. Corolla sales were up 2% in November 2011; the Matrix was down 13%.

No small car, not even defunct vehicles like the Chevrolet HHR, reported a more drastic year-over-year decline than the Honda Fit. Sales of Honda’s hatchback plunged 95%, making the Fit one of Canada’s worst-selling cars in November. The Fit is down 55% this year. Nissan’s cheap new Versa sedan helped sales of the Versa range climb 85%, though Versa sales are down 10% through eleven months.

After the jump you’ll find November 2011 sales data for mainstream midsize and large cars in Canada. Last month’s version of this post can be viewed here. Detailed monthly and yearly sales figures for these cars and every other model currently on sale can be accessed through the dropdown menu in the top right of this page.

Apart from the ignored Honda Insight and defunct Mitsubishi Galant, the Honda Accord’s 59% decline from November 2010 sales levels was bad – really bad – but it wasn’t the worst. In a month where Mazda 3 sales improved 8%, the Mazda 6 fell 64%. Mazda 6 sales are down 40% this year.
Kia Optima sales, on the other hand, jumped 1081% in November, helped along by the Optima/Magentis’s paltry sales totals from a year ago. The Chrysler 200 and Dodge Avenger reported 578% and 328% jumps, respectively. Toyota Prius sales increased, but the new Prius V managed to out-sell the regular Prius anyhow.

Sales of the Nissan Maxima, Buick LaCrosse, and Chevrolet Impala fell off the proverbial cliff in November 2011. Maxima sales, not particularly high in Canada to begin with, fell to just 81 units. LaCrosse sales were cut in half, and then some. Impala sales, which are down 20% this year, fell 35% last month.

The Dodge Charger coughed more hygienically in November, but large cars in Canada remain a sickly bunch. The Charger is down 10% this year. Only the Toyota Avalon and dying Buick Lucerne posted less awful declines. The Canadian new vehicle market is up 1.8% in 2011. 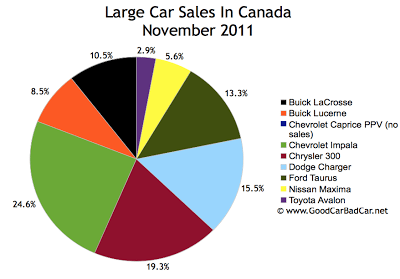