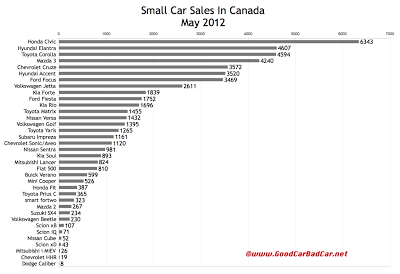 In May 2012 the Honda Civic expanded its sales lead over the Hyundai Elantra as Canada’s most popular small car and best-selling car overall. Civic sales jumped 41% in May and are up 23% year-to-date. May marked the sixth month in the last two years that Honda Canada has sold more than 6000 Civics.

Chevrolet sold one Aveo in May. In all, Canadians acquired 11,804 conventional subcompacts in May 2012 – that Aveo, plus some Sonics, Fiestas, Fits, Accents, Rios, 2s, Versas, Prius C hatchbacks, and Yaris hatchbacks and sedans. The Fiat 500’s 810 sales were split 587/223 in favour of the hardtop. Mercedes-Benz’s smart fortwo outsold the Scion iQ by 252 units.

You can click any of the accompanying charts for a larger view. The second chart shows the Chrysler 200 outselling the Toyota Camry and all other midsize cars in May. Year-to-date, Toyota Camry sales are up 127%, good enough for a class-leading 8543 sales through the first five months of 2012. The Chrysler 200’s year-over-year percentage changes take the Sebring into account. And yes, the Kia Optima sells twice as often as the Honda Accord in Canada. South of the border, the Accord sells more than twice for every Optima.

Finally, in the third table you’ll see after the jump, the Ford Taurus was the best-selling large mainstream car in Canada in May. The Chevrolet Impala, the leader of the pack last month and one year ago, fell to third overall in the monthly rankings, not just behind the Ford Taurus but behind the surging Chrysler 300, as well.

Historical monthly and yearly sales figures for these vehicles, for any vehicle currently on sale in North America, can be accessed through the dropdown menu at the top right of this page or at GCBC’s Sales Stats home.