Canadians once again made the still-fresh Hyundai Elantra the country’s best-selling small car and best-selling car overall, but the biggest surprise was perhaps the Honda Civic’s sixth-place finish among compact cars. Beaten by the Elantra, the Mazda 3, the Chevrolet Cruze, Ford’s Focus, and the Toyota Corolla, Civic sales slid 41% on dwindling supply and a certain thing we’ll call PDWCAMATDLY. People don’t want Civics as much as they did last year. Pid-a-wik-a-mat-ad-lee.

In the subcompact sector Hyundai’s new Accent proved to be the leader despite sales of an all-new 2012 model which have yet to match the volume of last year’s old model. Year-to-date the Accent is down 17%. Fortunately, the Accent is ahead of its nearest rival, the Nissan Versa, by nearly 5400 units.

In other small car news the Fiat 500 roasted the Mini Cooper in August 2011, and did so with ease. Although the 500 began 2011 a little late, the Chrysler-sold Cinquecento is ahead of the Mini by 1432 sales through the first two-thirds of the year. Take a break from scanning sales data to check out Driven reviews of the Elantra, Accent, and 500.

Speaking of reviews, The Good Car Guy was a huge fan of the Hyundai Sonata 2.0T Limited back in June. While Canadian car buyers clearly remain fans of the Sonata, turbocharged or not, and while the Ford Fusion remains the top selling midsize car in Canada, August 2011 was the Chevrolet Malibu’s month. Malibu sales shot up 60% compared with August of last year. Sonata sales slid 15% but are up 18% year-to-date. The Ford Fusion was up 5% in August but is down 2% year-to-date after a strong 2010.
The Mitsubishi Galant appears to be officially dead in Canada. Don’t count it out for sure; not yet. Some Mitsubishi dealer somewhere might have a Galant tucked away in the back of a gravel lot outside of town, just waiting for a buyer to accept $7500 off the MSRP.
Though they’re not best in class here like they are in the United States, both the Toyota Camry and Honda Accord formed part of August’s 20 Best-Selling Cars In Canada list. Expect an advertising blitz by Toyota on the 2012 Camry’s behalf, the effect being sales which could challenge the Sonata and Fusion later this year and early next year, at least on a monthly basis. Through eight months Toyota Canada has sold 7600 Camrys (down 23%) and 8028 Venzas (down 5%). 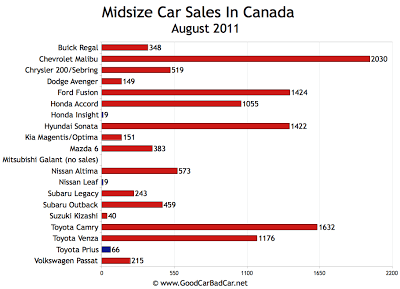 Canada’s large car segment consistently secretes such small numbers that it’s a wonder GoodCarBadCar.net covers it at all. The Impala, based on its $27,325 (less at least $1500 on cash credits) could easily be considered a competitor for the Malibu were it not for the fact that Canadians only seem to buy Impalas if said Canadians are rental car companies or public service departments.
Buick LaCrosse sales fell 20% in August. The dying Lucerne was down 51%. The Ford Taurus slid 14%. Sales of the Chrysler 300 and Dodge Charger were down 15% and 58%, respectively. (The Charger had a great month in July.) Nissan Maxima sales more than doubled to 326 from 149. Canadian sales of the Toyota Avalon rose 6%, or three units. 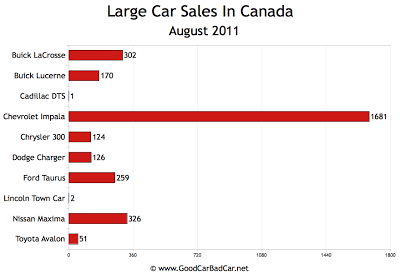