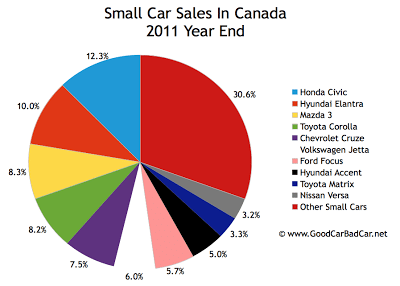 While the end of the compact car sales race revealed itself quite capably in the list of Canada’s 25 best-selling cars, a list which was absolutely full of compact cars, the subcompact race is more easily seen in first table below.

Year-over-year, Hyundai Accent sales slid 7.2%, but the Accent ended 2011 by picking up a head of steam, a fact made visible by December’s 72% boost. The Accent beat the Nissan Versa by 7783 sales to win the segment. In third place, Ford’s Fiesta found 13,064 buyers.

The Fiesta’s long-lost-brutha-from-anotha-mutha, the Mazda 2, was next up with 9020 sales. Toyota’s Yaris surged at the end of the year and ended 2011 with a Canadian sales total of 7968. The combined efforts of the Aveo and its replacement, the Sonic, afforded Chevrolet 7472 sales. The Kia Rio’s 6849-unit total placed it way ahead of the worst-selling Honda Fit.

There were a bunch of cars just starting off in 2011. Chevrolet sold 1241 copies of the aforementioned Sonic in 2011. GM Canada just began selling the Buick Verano in December. The Fiat 500 has only been on sale since February, and though not such a hit south of the border, the Cinquecento‘s been a roaring success in Canada. The Mitsubishi i and Scion iQ will forever remain niche market cars, but give them some time to grow more of a following and they will. Maybe.

A midsize table and the accompanying charts can be perused after the jump. Detailed sales figures for all these models and every other car currently on sale in North America can be found by accessing the dropdown menu at the top right of this page. December’s Canadian sales figures are pouring out in this section of GoodCarBadCar – 2011 results can be seen by scrolling through this label. 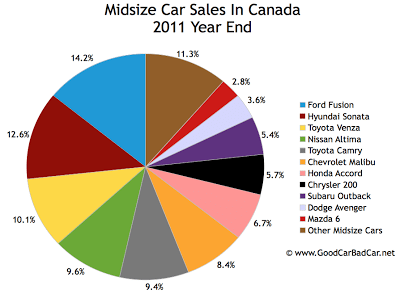 Let’s keep it simple: the best-selling midsize car in Canada in 2011 was the Ford Fusion. Sales dipped, but the Fusion held off the Hyundai Sonata with a measure of ease. Following the Sonata was Toyota’s unconventional midsize car contender, the crossoverish Venza, seller to 13,159 buyers. Before we get to the Camry, Malibu, Accord, Chrysler 200, Outback, Avenger, and Mazda 6 we must first make a stop at the Nissan Altima, sales of which slid 7% to 12,537.

There are other unconventional contenders in the table below. You already read about the car-that-is-an-SUV Outback. In the hybrid/electric crowd, the Toyota Prius came out victorious, but only because the Prius V didn’t have enough months to build up its total. In just three months – really just two and a bit – the Prius V found 553 buyers. The Chevrolet Volt beat the Honda Insight (by 33) which beat the Nissan LEAF by 72 sales in the battle of irrelevant sales totals.


Source: Manufacturers & ANDC
109 of the Aveo/Sonic’s December total was Aveo. 6231 of the year end total was Aveo-sourced.
Chrysler 200 year-over-year numbers are contrasted with the Sebring.