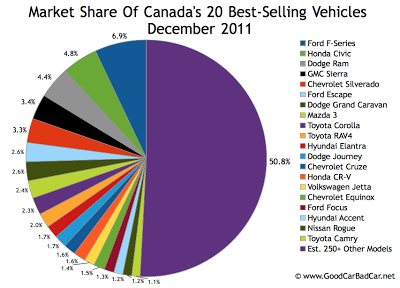 Sales of Canada’s favourite minivan plunged 24%, but the Dodge Grand Caravan still finished December with 2.6% of Canada’s new vehicle market. Sales of the Honda Odyssey jumped 11%, yet December’s second-best-selling minivan sold once for every 2.9 Grand Caravans.

The 2011 Year End list of Canada’s 30 best-selling vehicles can be viewed here. Examine this month’s list, gain context from last month’s edition, and make use of the dropdown menu at the top right of this page to find detailed sales figures for all these models and every other nameplate on sale in North America today.