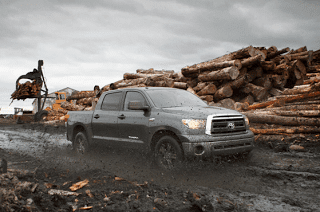 Canada’s five best-selling trucks accounted for 15% of the new vehicles sold in May 2012. More than one-third of the Fords sold in Canada in May were F-Series trucks. More than one-quarter of all Chrysler Canada sales were Ram pickups. The Silverado and Sierra were responsible for 34 out of every 100 GM Canada sales.

FoMoCo, Chrysler Canada, and General Motors sold 81,833 new vehicles in Canada in May. Slightly more than three out of every ten of those Detroit/Torino-derived sales stemmed from the F-Series, Ram, Sierra, or Silverado. The market for those four trucks grew 27.5% compared with May 2011.

In other words, sales of the (discounted) pickup truck are very healthy in Canada. There are thousands of consumers and businesses who need a truck. And apparently there are thousands more who are willing to tolerate the $126 expense every time they do 650 kilometres of city driving in their F-150 EcoBoost.

Canada’s top five best-selling trucks in May 2012 are ranked by volume below. GoodCarBadCar will have more on truck sales later in the month. Historical monthly and yearly sales figures for these vehicles and every other automobile on sale in Canada can be accessed through the dropdown menu at the top right of this page or at our Sales Stats home. Links to Canada’s other best seller lists and brand-by-brand rankings are clickable at the bottom of this post.