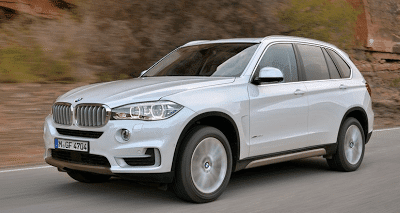 Autumn is traditionally a big season for the BMW X5 in Canada, and this October certainly held true to form. Since January 2010, BMW Canada has sold more than 400 X5s nine times. This happened three times from September to November 2011, again in September and October 2012, and in September and October 2013. But last month, X5 sales rose to a whole ‘nuther level, with 703 sales, a 41% year-over-year increase.

703 X5 sales were sufficient for BMW to claim the 20th spot on this list of Canada’s 20 best-selling SUVs and crossovers in October 2013. We’ve seen premium brand representation in the top 20 before. Indeed, the Lexus RX and Audi Q5 ranked higher than the X5 in October. But premium brand representation doesn’t usually involve vehicles priced above $60,000. The Lexus RX, which outsells the Toyota Highlander, is priced from $46,150; the Audi Q5 starts at $40,900.

Don’t confuse the X5’s surge with new-found ubiquity. Ford’s top-ranked Escape sold on nearly seven occasions for every X5 that BMW Canada sold in October, nearly twelve for every X5 sold year-to-date. Sales of the X5 will slow now that the X5’s traditional selling season is coming to a close: the E70 X5’s overlap with the F15 X5’s arrival has surely helped. Automotive News says BMW Canada sold 172 X1s in October 364 X3s, and 43 X6s.

Historical monthly and yearly sales figures for any of these best-selling SUVs and crossovers can always be accessed through the dropdown menu at GCBC’s Sales Stats page, and for those not viewing the mobile version of this site, near the top right of this page, as well. GoodCarBadCar has already published the list of Canada’s best-selling trucks in October and Canada’s most popular cars. The + icon has been removed from year-over-year improvements in the best seller list below. Look instead for red font to designate year-over-year declines. We’ve also added prior year data, so you can spend less time hunting around for the numbers you need.

With its best sales month since July 2012, Canada’s best-selling SUV in October 2013 was the Ford Escape.

Source: Automakers
Red font indicates year-over-year declining sales
* Including the Santa Fe XL, total Santa Fe sales rose 3.3% to 2257 in October; 30.2% to 24,769 YTD.
Updated at 9:36 AM on 11.13.2012, as a previous version of this post didn’t include the Jeep Grand Cherokee and listed the vehicles trailing it one position higher than they actually were.