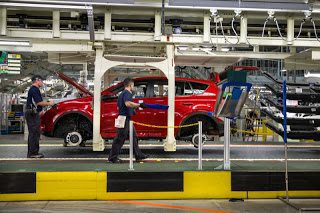 Best-ever sales were more than enough to crown the Toyota RAV4 Canada’s best-selling SUV in March 2013. Toyota’s newest crossover is now in fourth-generation form. GoodCarBadCar reviewed the 2013 RAV4 just last week and found it to be rather inexpensive, miserly with fuel, and in need of a bit more power.

Not only was it a leader among utility vehicles, Canadians made the new RAV4 the best-selling Toyota product last month, as well. The RAV4 finished 380 sales ahead of the Ford Escape in one race; 477 sales ahead of the Toyota Corolla in another.

Escape sales fell 12% in March but remain up on last year’s first-quarter pace. With 8411 units in buyers hands between January and March, the Escape is 1733 sales ahead of the RAV4 through three months. The Escape hadn’t surrendered its Canadian best-selling SUV crown since last March, when another Japanese utility vehicle led the way.

Best seller lists sometimes give the impression that the vehicles present on such a list are peers. We should be clear on the fact that, in Canada, in March, the five most popular SUVs and crossovers were way out in front of the peleton. That’s not to take away from the Mazda CX-5’s best Canadian sales month so far – March was also the CX-5’s best month yet south of the border, too – but it is to say that math should be done.

Again, it was a terrific month for the CX-5, and for the Subaru Forester, BMW X5, Acura MDX, and Mercedes-Benz GLK, sales of which were boosted by a new diesel version. But those top five vehicles owned an astounding 9.3% of the overall new vehicle market. The next ten-best-selling utilities owned just 8.2% of the market in March. That’s not a mark on their lack of popularity; it’s a tell-tale sign that Canada’s favourite crossovers are very, very much favoured.

Below, Canada’s 20 best-selling SUVs and crossovers are ranked by March 2013 sales volume. Forever and always, you can find historical monthly and sales figures for both Canada and the U.S. by selecting a make and model at GCBC’s Sales Stats page. Key, links are clickable at the bottom of this post and at GCBC’s Best Sellers page.