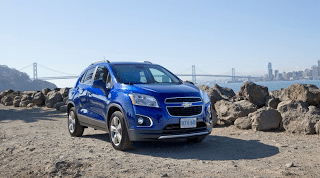 It was joined by the Lexus RX, Chevrolet Trax, Jeep Grand Cherokee as vehicles which weren’t in the top 20 in March but did crack the upper echelon in April.

Kicked out of the top 20 were Jeep’s own Compass, the Mercedes-Benz GLK, Acura MDX, and the BMW X3. Certainly not kicked off the podium were 2013’s leading trio. But after a glorious month at the top of the heap, Toyota’s new RAV4 slid to a still impressive (up 38.5%) third place, 446 sales behind the Honda CR-V, which was 308 sales back of the top-ranked Ford Escape.

Escape sales are up 8.5% in the first third of 2013 after falling slightly in 2012, which came after a 3% increase in 2011, which followed up on a 16% increase in 2010. You get the picture: Escape sales are consistently strong in Canada. The debut of the first all-new Escape since the original all-new Escape more than a decade ago hasn’t stymied Escape growth. 2.4% of all vehicles sold in Canada are Escapes; only 2.0% of vehicles sold in the United States are Escapes.

You can always select a make and model at GCBC’s Sales Stats page to find historical monthly and yearly sales figures from both Canada and the United States. Pertinent links are clickable at the bottom of this post, but you can also find more lists like this one at the Best Sellers page. Below, Canada’s 20 best-selling SUVs and crossovers in April 2013.

Source: Manufacturers & ANDC
Red font indicates year-over-year declining sales
* Hyundai Canada kindly separates sales figures for the new Hyundai Santa Fe Sport and its similarly-named big brother, the Santa Fe XL. Hyundai USA does not. Combined sales of the two were a Journey-beating 2636 units in April, up 26.2%, and total 8435 this year, up 22.3%.