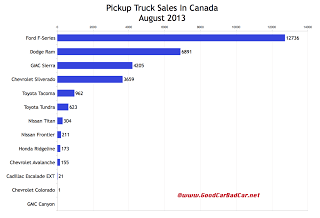 Admittedly, Ford Canada didn’t report stagnant F-Series volume in August 2013. F-Series volume slid 8%, a meaningful 950-unit decline. However, Ford ripped off a record-setting pace in 2012 and is on pace to crush that record this year. Do the 1% and 8% summer declines mean anything?

Ram’s 24% increase in August was not enough to overcome the F-Series’s drop, not since the F-Series’ drop was paired with declines from the Chevrolet Silverado and seven other pickups. Canada’s pickup market slid 1% in August 2013, a 285-unit drop.

(UPDATE: Ford released new August numbers for the F-Series in October, changing the overall results in this post. See table below for updated and increased F-Series numbers.)

Remember, the cancelled and/or defunct Avalanche, Escalade EXT, Colorado, Canyon, and Ford Ranger contributed 680 sales in August 2012 but only 177 in August 2013. Removing those trucks from the equation, Canada’s truck market grew 0.8% in August.

Best seller lists for cars and SUVs are coming up soon on GCBC. You can always find historical monthly and yearly sales figures for any vehicle by selecting a make and model at the Sales Stats page.