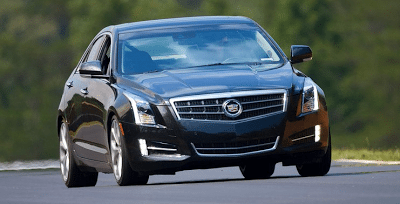 There’s no doubt that Cadillac’s ATS isn’t the top seller, but it’s positioned as the fourth-best-selling car in its class, and it’s outselling other new rivals like the Lexus IS and Infiniti Q50, both of which are produced by automakers which have established themselves in the category. Expectations for new 3-Series competitors in the small luxury sports sedan class are always high, and that’s clearly been the case with the Cadillac ATS.

If we judge the ATS not as a 3-Series rival but as a boon to Cadillac, it’s selling rather well. And if we say the ATS isn’t successful, we ought to judge the Lexus IS and Infiniti Q50 and Volvo S60 with the same harsh criticism. Among premium brand passenger cars in Canada, only three sold better in October. For a car that’s only been on the market for a year, that’s not bad. October 2013 was the ATS’s best Canadian sales month so far.

Historical monthly and yearly sales figures for any of these models can always be accessed through the dropdown menu at GCBC’s Sales Stats page, and for those not viewing the mobile version of this site, near the top right of this page, as well. Canada’s favourite luxury vehicles in October 2013 are listed below.

For the purposes of the above list, premium brands include Acura, Audi, BMW, Cadillac, Infiniti, Jaguar, Land Rover, Lexus, Lincoln, Mercedes-Benz, Porsche, and Volvo. Brands like Aston Martin, Ferrari, Lamborghini, and Lotus don’t report specific monthly sales data. Bentley and Maserati only report brand totals. Buick has been excluded with a bunch of other automakers that don’t sell vehicles with base prices higher than $45K. BMW Canada is not including sales of the 4-Series with the 3-Series as BMW USA has done thus far.
* A4 sales include sales of the unreported Allroad.

Source: Automakers & ANDC
Red font indicates year-over-year declining sales
* A4 sales include sales of the unreported Allroad
$50,000 CDN (before delivery) is an arbitrary borderline, but if GCBC was to follow this new system of designating only expensive vehicles as luxury vehicles, $50K seemed like a safe place to begin – it equals the average U.S. new car transaction price plus $15,000, plus another $5000 to account for Canadian increases. Plenty of less expensive vehicles with specific models feature prices above $50,000 – M, RS, and AMG models come to mind, specifically – but in the case of this list, we know that none of the registrations were of cars priced at $35,900, as would be the case with the BMW 320i, which costs less than a Hyundai Santa Fe 2.0T Limited. The biggest problem with a $50,000 minimum price of entry? Cars like the Cadillac XTS, which starts at $48,940, sporty cars like the $49,500 Audi TT, and SUVs like the $49,930 Chevrolet Tahoe, $49,990 Acura MDX. Volkswagen recently increased the base Touareg’s price to $50,975
Total Infiniti G/Q50/Q60 sales rose 27% to 292 in October but are down 6% to 2589 YTD. Total G Sedan/Q50 sales rose 47% to 267 in October; 1% to 2128 YTD.