Let’s not pretend that it’s difficult to see what’s going on here. Only three of Canada’s 15 best-selling premium brand vehicles in March 2016 were traditional passenger cars. Combined sales of those three cars plunged 26% in March.
The other 12 members of the top 15 were all utility vehicles, from the second-overall Mercedes-Benz GLE to the Land Rover Range Rover Sport and Infiniti QX60, tied at the bottom of the list. Not a single one of those 12 nameplates sold less often in March 2016 than during March 2015, nor did any one of the 12 sell less often in 2016 Q1 than in 2015 Q1. Their collective volume jumped 35%.
The trend is similar when examining the most popular $50,000+ vehicles on sale in Canada. Only two cars cracked the top 15, and while their sales are rising relative to 2015, it’s clear that high-riding SUVs and crossovers are at the core of the market’s growth. 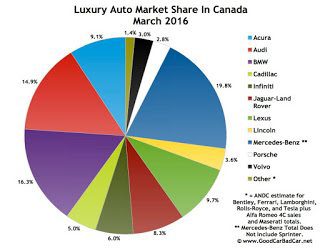 The seven leaders in March were all utilities, from the GLE, Lexus RX, and BMW X5, to the Acura MDX, Range Rover Sport, Volvo XC90, and Audi Q7.

Through the first three months of 2016, car sales at Acura, BMW, Infiniti, Lexus, Lincoln, Porsche, and Volvo are in decline while sales of their SUVs/crossovers are on the rise. Meanwhile, at the premium brands which are growing their car volume – Audi, Cadillac, Jaguar-Land Rover, Mercedes-Benz – SUV/crossover sales are rising far faster than car sales.

Source: Automakers & Global Automakers Of Canada
* Escalade breakdown by variant
$50,000 CDN (before delivery) is an arbitrary borderline, but if GCBC was to follow this new system of designating only expensive vehicles as luxury vehicles, $50K seemed like a safe place to begin – it equals the approximate average U.S. new car transaction price plus $15,000, plus another $5000 to account for Canadian increases. Plenty of less expensive vehicles with specific models feature prices above $50,000 – M, RS, and AMG models come to mind, specifically – but in the case of this list, we know that none of the registrations were of cars priced below $50,000.