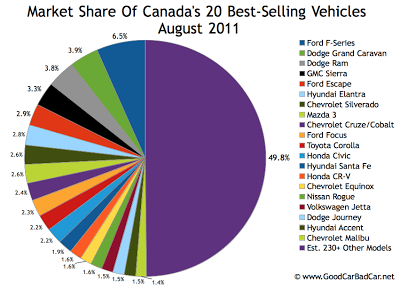 Home
Top Level Reports
Marketshare
Wrapped up in every thousand vehicles sales in Canada from August 2011 were 65 Ford F-Series pickups truck sales. There were more than 140,000 new vehicle sales in Canada last month. That F-Series tally is up from July’s 61 per 1000.

Canada’s new car market grew by 3.2% compared with August 2010. Through eight months, 2011’s new car market is up 1.8%. That increase works out to fewer than 19,000 sales. August’s 20 best-selling vehicles were responsible for 50.2% of all new vehicle sales which occurred in Canadian showrooms between the 1st and 31st of last month.

Lists for August 2011’s 20 best-selling cars in Canada, 10 best-selling sport-utility vehicles in Canada, and 10 best-selling trucks in Canada were published a week ago. In the chart above you’ll see the 20 most popular candidates from all those lists integrated into a chart which displays each vehicle’s market share in contrast to 19 other popular vehicles and the remainder of the market as a whole.