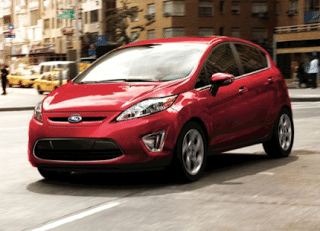 Although sales of Canada’s best-selling car plunged dramatically on year-over-year terms, the Honda Civic still ended March 2012 as the nation’s most popular car. March 2011 was an unbelievable clear-out month and there was little chance Honda was going to be able to repeat with another 8000+ month. By the end of the first quarter of 2012, Honda’s lead over the Hyundai Elantra had grown to more than 3400 units.

Ninth in January and eighth in February, the Toyota Camry was, you guessed it, Canada’s seventh-best-selling car and top midsize car in March. 426 of the Camry’s 2022 sales were of the hybrid variety. The Camry was one of six classically midsize sedans among the top 20 best-selling cars in Canada in March, one of three Toyotas, and one of eight Japanese-badged cars.

Of course you’ve already scrolled past the text to discover the big surprise in March 2012’s Canadian passenger car standings. The 18th-best-selling car in Canada in March was the Fiat 500. The year-over-year comparison with March 2011 may be invalid given that it was early days for the 500 a year ago, but the fact remains that March was the best month yet for Fiat sales in Canada. Chrysler Canada isn’t likely going to repeat the 189% jump in April – that would mean approximately 2570 sales next month and a spot close to the top five. March was Fiat’s best sales month south of the border, as well, but 3712 sales were only good enough to rank the 500 48th among passenger cars.

The majority of vehicles have already had their monthly and year-to-date sales figures updated in GoodCarBadCar’s database of model-specific data, all of which you can access through the dropdown menu at the top right of this page. The few manufacturers which haven’t been completed will be in the coming hours now that all the Canadian numbers are in. Below, you’ll find a complete table of the top 20 best-selling cars in Canada in March 2012, including not one, not two, but three European entries.