Were other vehicle types to be classified as “cars”, this list would look a little different. But the fact that the four best-selling cars in Canada come from the same vehicle segment is beyond telling. In fact, the 6th and 8th and 10th best-selling cars from March of 2010 also hail from the compact car class while a couple other vehicles on the list are only a bit smaller. That leaves the oft-maligned-but-still-wildly-successful 2010 Toyota Camry and the Good 12-winning Ford Fusion Hybrid (and its more common stablemates) to fill in the gaps.

This won’t surprise anybody who closely follows GoodCarBadCar.net’s Best Sellers Graphs. Those more acquainted with Sales Stats from south of the border are likely surprised to see the 2010 Volkswagen Golf playing so well in Canada. In the States, the Jetta is Volkswagen’s strong performer. For the record Jetta sales reached just 870 in Canada last month. Keep in mind, however, that the wagon bodystyle on that platform is sold in Canada as the Golf Wagon while Americans see it under the Jetta badge as a SportWagen. 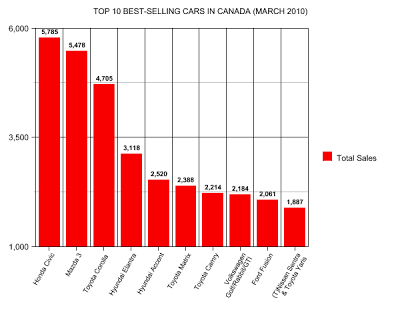