Beginning on New Years Day – or more likely the day after when dealerships opened their doors – the Mazda 3 roared out of the gate on to wintry Canadian roads. Tackling the Honda Civic isn’t a feat for the lighthearted, especially in Canada where Civic sales reign supreme month-after-month, year-after-year.
This info is coming to you late because it came late to The Good Car Guy. Nevertheless, you can now see the Top 10 Best-Selling Cars in Canada for the month of January 2010, and some of the results are even more surprising than the Mazda 3‘s position atop the proverbial podium, 604 sales ahead of the Honda Civic. Late in life, with a new generation on the horizon, the Hyundai Accent still rests inside the Top 5. The Nissan Altima handily out-sold its internal competition in January; along with all other midsize sedans.
And once again, the Toyota Venza topped the Toyota Camry (as it should). Though not appearing in the Top 10 for February, a Graph you’ll see tomorrow, the Toyota Venza managed to tie the Toyota Camry in the second month of 2010 to maintain its lead over its sedan counterpart. 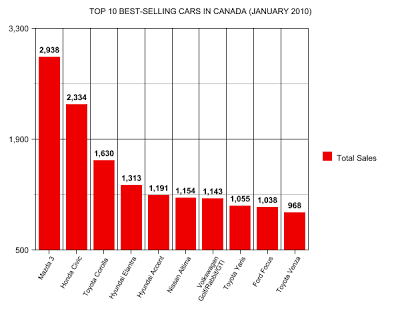