The 20 best-selling vehicles in Canada from June 2011 posted a dominant performance by grabbing half of all new vehicle sales nationwide. With significantly more than 200 models challenging the 20 most-popular nameplates, it’s not difficult to form a conclusion which firmly claims that Canadians like to stick with the vehicles they trust, or at least the vehicles they know best.

Even more impressive than the feats of Canada’s 20 best-selling vehicles is the accomplishments of the six top sellers. Nearly 23 out of every 100 new car sales in Canada in June resulted from the purchase or lease of a new Ford F-Series, Dodge Ram, Ford Escape, Dodge Grand Caravan, GMC Sierra, or Hyundai Elantra.

In a market worth 165K June sales, sales figures for the Ford F-Series stick out like the numbers put up by Kevin Durant all season long. The figures are so high they make other, quite impressive numbers look small when really, they aren’t. Dodge sold 6331 Rams in June 2011, that’s up 28%. But Ford F-Series sales, down 10% though they were, came within spitting distance of 10 grand. The market share achieved by the F-Series and other members of the 20 best-selling vehicles in Canada group can be seen in the chart below. 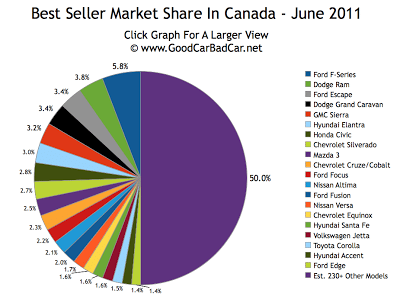