Just as the Encore doesn’t (and shouldn’t) sell as often as the Trax, Buick’s entry-level sedan, the Verano, doesn’t sell nearly as often as the Cruze on which it’s based. General Motors Canada sells 5.5 Cruzes for every Verano. The Cruze, incidentally, is Canada’s most popular Detroit brand passenger car. But GM, Ford MoCo, and the Chrysler Group market six different vehicles lines that are more popular than their best-selling car, including a small SUV and a minivan. And four trucks.

One year ago, the Ford F-Series’ lead over the second-ranked vehicle was 9435-units strong. This year, its lead over the Ram Pickup is 11,607 units. The gap has been blown wide open in spite of the Ram’s 18% year-over-year increase. F-Series sales are up 20%.

SUVs Only: All 86 Ranked By April/2013 YTD Canadian Sales 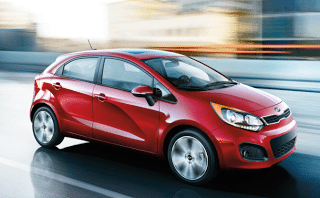 And, the bigger news: the Hyundai Elantra has moved up two spots, just enough to become Canada’s best-selling car. It’s a position the Elantra has periodically held on a monthly basis. But in year-to-date terms, the Elantra has never been numero uno this late in the calendar.

These are year-to-date rankings, but you can sort vehicles by April volume by clicking the April 2013 column header, or you can rank vehicles by improvements or declines using the % columns. Or, most importantly, you can list automakers together by selecting the Vehicle column header. Just remember, the list is horizontally flipped from the norm: YTD on the left, monthly data on the right.

Source: Manufacturers & ANDC
Red font indicates year-over-year declining sales
Italicized unranked lines are nothing more than available breakdowns, already included in the model’s total, not in addition to the model’s total. Sales data for brands such as Aston Martin, Ferrari, Lamborghini, Lotus, Maybach, Rolls-Royce, Tesla etc. are unfortunately not available or are not broken down by model. estimates say sales for Ferrari and Lamborghini were 18/70 (April/YTD) and 4/14 (April/YTD) respectively. Total Maserati and Bentley volume is reported, but not by specific models.
* Hyundai Canada kindly separates sales of the Santa Fe Sport from the Santa Fe XL. Combined, Santa Fe sales equal 2636 in April (up 26.2%) and 8435 year-to-date, up 22.3%.
** Mini’s Canadian sales data doesn’t separate the different Cooper versions, which now includes the Paceman.
*** Total Genesis volume was 311 units in April, down 11.4%; 846 in the first quarter, down 10.6%.
^^ Total Prius Family volume in April was 750 units, down 47.3%; 2306 in the first quarter, down 27.2%.