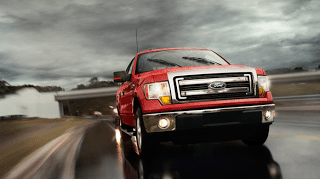 The only other manufacturer capable of selling as often as Ford Canada, the Chrysler Group, rose 1.5% in September thanks to rising Ram sales, no thanks to Jeep or Fiat.

Overall, the industry rose by nearly 6000 sales, or around 4%. New automobile sales in Canada are up more than 3% so far this year, an increase of 45,000 units.

Don’t like to see automakers arranged alphabetically? Click column headers to sort automakers by September ranking, September 2013 sales, year-over-year change, or any other order. You can always find historical monthly and yearly sales figures for any brand by clicking the brand name in the table below or by selecting a make (or model) at GCBC’s Sales Stats page.

Click column headers to sort by specific categories. Using the mobile version of GoodCarBadCar? Switch to the web version at the bottom of the page, at which point columns should be sortable.
September 2014 • October 2013 • August 2013 • September 2012
Updated at 3:17 PM AT on 10.09.2013

Source: Automakers, AIAMC, Desrosiers & ANDC
Red font indicates declining year-over-year volume
*Does not include Lamborghini
** Preliminary and unofficial total will rise slightly when a handful of niche automakers report
^ Excluding Sprinter: Mercedes-Benz up 17.6% to 2830 in September; up 2.3% to 23,069 units YTD.

Porsche sold 333 vehicles in Canada in September, up from 294 a year earlier. Toyota’s overall increase was powered by two of its brands: Scion sales dropped 17% as every model except for the tC fell sharply.

Another 6000+-unit month for the Honda Civic helped drive Honda to a 9% year-over-year increase.

The Civic accounted for more than half of the Honda brand’s volume. Kia reported its ninth consecutive monthly year-over-year decline. Subaru Forester sales shot up 82%.

General Motors decline was seen most clearly at Chevrolet, where volume fell 10%. GMC, Buick, and Cadillac in particular, reported improvements.