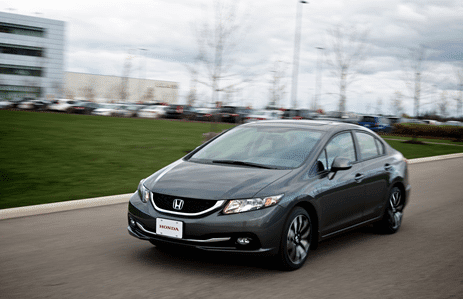 Canada’s auto industry built on January 2014’s narrow gains with greater February improvements. From Chrysler Canada’s 10% year-over-year increase to Nissan Canada’s 21% jump, there was plenty of moderately good news to be spread around.

A handful of brands, however, struggled to match February 2013’s pace, and many of those brands were high-volume players. Mazda sales slid 12%, Volkswagen was down 5%, and General Motors Canada posted a 7% loss, a decrease of 1006 units on top of January’s 2770-unit drop.

The 2.4% year-over-year increase in total new vehicle sales was, as has often been the case over the last year, powered in part by Canada’s two top-selling vehicles. Sales of both the Ford F-Series (up to 7866 units) and Ram Pickup (up to 5562 units) rose 7.5%.

Together, the top-selling pair accounted for nearly 13 out of every 100 new vehicles registered in Canada in February 2014.

Canada’s leading upmarket brand was BMW, as the Sprinter commercial van was the vehicle which propelled Mercedes-Benz over the top. BMW outsold Benz by 152 units last month.

The second-biggest sales improvement was accomplished by one of the slowest-selling brands, Smart. Jeep sales rose 41% as the new Cherokee, with 1358 sales, once again led the brand. On the flip side, Lincoln sales plunged 55%. Buick reported an 89% improvement, however, as Encore sales shot up 2691% from the 23 generated in its second month on the Canadian market one year ago.

Ford continues to be Canada’s top-selling automobile brand, but no manufacturer sold more new vehicles in Canada over the last two months than Chrysler. The namesake brand, with plenty of help from Dodge, Jeep, Ram, and Fiat, leads the Ford Motor Company by 5467 units heading into March. At this point in 2013, the Chrysler Group led FoMoCo by 1360 units but ended 2013 23,436 sales back of Ford/Lincoln.

Don’t like to see automakers arranged alphabetically? Click column headers to sort automakers by February ranking, February 2014 sales, year-over-year change, year-to-date totals, or any other order. Best seller lists for cars, trucks, and SUVs will be added in the next couple of weeks. In the coming days, GCBC will also publish a complete list of February sales for every single vehicle line, a list which includes brand results. To find out what you can expect, you can see December’s year end version of that post here. You can always find historical monthly and yearly sales figures for any brand by clicking the brand name in the table below or by selecting a make (or model) at GCBC’s Sales Stats page.

Source: Automakers, Desrosiers, AIAMC & ANDC
Red font indicates declining year-over-year volume
* Does not include Lamborghini
^ Excluding Sprinter: up 2.5% to 1953, up 14.7% to 3946 YTD