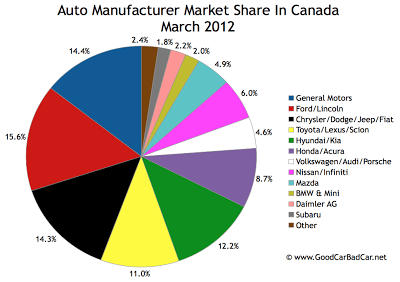 Home
Top Level Reports
Brand Marketshare
Canadians acquired nearly 158,000 new vehicles in March 2012. Compared with January and February, the new vehicle market is a whole different ball game once spring has sprung. March sales accounted for 44% of all Q1 sales this year (and 46% of Q1 sales in 2011) as, year-over-year, the Canadian new vehicle market grew 2.8%.

Much of that growth went Chrysler Canada’s direction. With Fiat now firmly entrenched in the public consciousness, year-over-year volume grew 189%. The Chrysler brand itself was up 178%. And Jeep sales grew 15%. Chrysler Canada’s market share jumped from 13.5% in March 2011 to 14.3% in March 2012. Although Ford Motor Company had its way this March, no auto manufacturer has sold more vehicles in Canada this year than Chrysler, thanks mostly to the Ram pickup and Dodge’s Grand Caravan, two vehicles which accounted for 51% of Chrysler’s 55,420 sales in Q1.

Brand-by-brand volume rankings for March were published yesterday in this Canada Auto Sales By Brand post. Over the coming days, use the dropdown menu at the top right of this page to find sales figures for specific models. Many brands – including Chrysler, Dodge, Jeep, Fiat, Ford, Lincoln, and Porsche – have already been fully updated. The chart below can be clicked for a larger view in order to examine which manufacturers enjoyed March most.