The Ford Motor Company finished 2011 having accounted for 17.4% of all new vehicle sales in Canada. This was more than two percentage points ahead of General Motors. GM was a little less than one percentage point ahead of Chrysler Canada. Toyota, which owned 12% of the market in December 2011, owned 10.2% over the course of 2011. Honda Canada’s market share stood at 7.8% on New Year’s Eve.

While those brands stand out as the conventional favourites, the two Korean brands combined to run their market share tally up to 12.3%. That’s up from 11.1% in 2010 when Hyundai/Kia finished just ahead of Toyota Canada. Honda Canada was responsible for 91 out of every 1000 new vehicle sales in 2010 but just 78 out of every 1000 in 2011.

The first chart you’ll see below examines the December 2011 results, details of which you should delve into here. Final results for the whole calendar year are offered up in a more detailed table, as well. Compare these charts with previous editions by checking out the links at the bottom of this post. 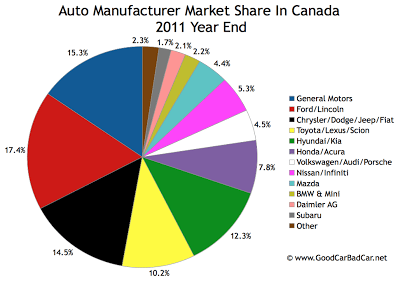