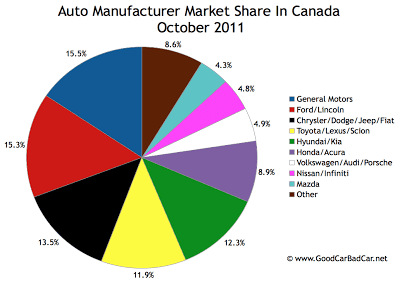 Home
Top Level Reports
Brand Marketshare
One month ago the September 2011 edition of this Canadian market share post had General Motors at 12.5%, Ford at 19.1%, and the Chrysler Group at 14.2%.

Things have changed. Ford lost huge chunks of September’s market share as Canadian Blue Oval sales slid slightly on falling F-Series volume. General Motors, with its two biggest brands, posted significant year-over-year gains and enjoyed a three percentage point boost in market share. The Chrysler Group was up substantially over October 2010 sales levels. But the 16% drop in Dodge/Ram sales from September to October is reflected by Chrysler’s market share decline, from 14.2% to 13.5%.

There’s more to the market than just the Detroit-based American manufacturers, however. The three combined for just 44.3% of Canada’s October market, a market which was up 2.1% from a year ago. Automakers like Mercedes-Benz, BMW, and Subaru meet in the brown section of the pie chart. Brands such as these combined for a small increase in market share, from 8.3% in September to 8.6% in October. Mazda was level. Hyundai/Kia fell by slightly less than one percentage point. Nissan Canada slid by a half percentage point. The VW Group improved, but only narrowly.

Honda Canada, on the other hand, was up by more than a half percentage point. And Toyota Canada, with a 2.5% year-over-year volume boost at the main brand; a 0.7% improvement at the flagship Lexus brand; and 355 Scions, shot up from 10.3% to 11.9%. Last year at this time Toyota Canada owned 11.8% of the market. Honda Canada, however, is down markedly from the 10.4% market share of October 2010.