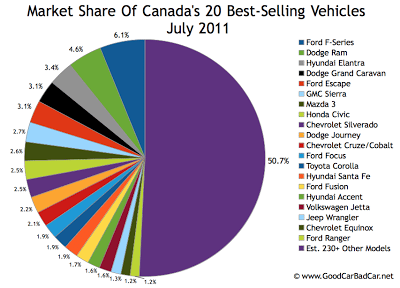 Home
Top Level Reports
Marketshare
Very nearly half of all new vehicles sold in Canada in July 2011 were one example or another of the country’s 20 best-selling nameplates.

Ranging from the Ford F-Series to the Ford Ranger pickup trucks with individual market share standings of 6.1% and 1.2%, respectively, Canada’s 20 best-selling automobiles have a far stronger grasp on the overall market than the 20 best-selling autos in America. Approximately 16% of the overall new vehicle market was absorbed by Canada’s four favourite trucks: the F-Series, Dodge Ram, GMC Sierra, and Chevrolet Silverado.

There are five trucks shown in the chart below. Add to that five SUVs and crossovers and one minivan and you’re left with nine passenger cars, the most popular of which was the Hyundai Elantra. The market share owned by all these vehicles in July can be seen below. For sales figures, check Canada’s Best Seller lists.