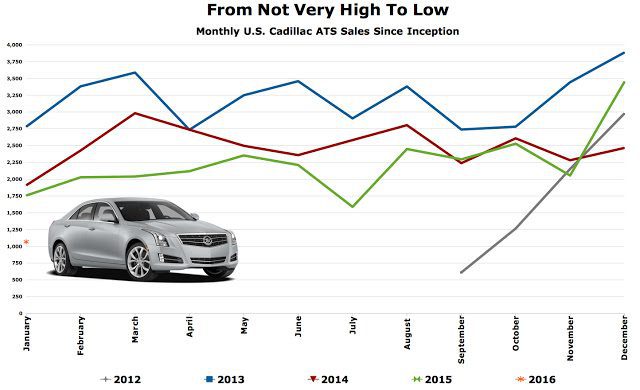 Never before has the ATS ever achieved such a low full-month U.S. sales total. (Only in an abbreviated September 2012, when the ATS was launching, has Cadillac ever reported a lower monthly total.)

For the ATS, January 2016 was a low-volume month in comparison with all other Januarys in the nameplate’s history, and indeed, any month regardless of season.

The ATS’s strong December is partly to blame, of course. Sales were pulled forward to make December the first 3K+ ATS sales month in two years. Quirks of the calendar also made January 2016 a shortened sales month. There were only 24 selling days last month, down from 26 at this time a year ago.

Nevertheless, in comparison with January 2015, the ATS’s daily selling rate was down 34% to only 45 ATSs per day, or about one ATS sale per day for every 20 Cadillac dealers.

In terms of volume, ATS sales have decreased every January, falling from 2781 units in January 2013 to 1909 in January 2014, 1757 in January 2015, and only 1067 units in January 2016. That’s a 62% drop in three years. We expect to see luxury cars struggle to maintain market share as they age, particularly now as buyers turn toward SUVs and crossovers in larger numbers. But the ATS’s sharp decline comes as the nameplate’s model range grows to include an additional bodystyle and performance iterations.

(adsbygoogle = window.adsbygoogle || []).push({});
There’s deeper meaning behind the ATS’s decline, however. U.S. sales of the Cadillac CTS sedan plunged 40% to only 1013 units, a 77% drop compared with January 2011 and the fifth consecutive year of declining January volume. Overall Cadillac sales slid 8% to only 10,740 units, the lowest monthly total for the brand since May 2012. The only Cadillac product to post improved sales was the SRX, which is set to be replaced shortly by the XT5. Non-SRX sales plunged 27% to only 5962 units.

Lexus sold 6956 copies of the RX alone in January.

Cadillac will soon begin selling the CT6 sedan, as well. But it’s becoming increasingly obvious that U.S. car buyers are increasingly uninterested in Cadillac cars. The CTS is a tremendous car on many levels, but consumers don’t care. The ATS’s rear seat is small, but one would assume that the car’s excellent ride and handling would overcome that disadvantage. Except that can’t be done, because the ATS is a small Cadillac sedan. And buyers of small luxury cars choose BMW, Mercedes-Benz, Audi, Infiniti, and Lexus. Not Cadillac.

Cadillac can be strong again. But will they be bolstered by strong sedan performances from an aging ATS, an impressive CTS, or a new CT6? Probably not.

Timothy Cain is the founder of GoodCarBadCar.net, which obsesses over the free and frequent publication of U.S. and Canadian auto sales figures. Follow on Twitter @goodcarbadcar and on Facebook. The HR-V was supplied by Honda Canada’s press office.