SUV coupes, an oxymoronic amalgam of two primarily offbeat terms themselves, haven’t exactly set the Canadian Marketplace on fire. True, BMW and Acura don’t require the X6 and ZDX to be world famous. These two vehicles are built using donated architecture and sell at higher price points. Even so, BMW X6 and Acura ZDX Sales Stats are abysmal.

All GCBC Graphs point to the fact that The Good Car Guy hates localized visual inspections when used as evidence to support car sales theories, but out of the two ZDXs seen on roads near GCBC Towers, one driver didn’t have enough headroom and the other was a manager at the Acura dealership. Both vehicles are members of The Bad 8 Supersize v2.0.
Every time Nissan dealers in Canada sold a Cube in June 2010, Canadian Kia dealers sold 6 Souls. Selling souls is something I strongly discourage, but the selling of Kia Souls is one reason Kia has become a serious automotive player, particularly in the value-minded market known as Canada. The advent of Scion dealers in Canada come autumn could potentially make the Cube an even rarer sight once the xB begins attracting buyers.
And what is it about the Chevrolet HHR that Canadians despise so much? The Good Car Guy’s review in the Chronicle-Herald a few years ago wasn’t exactly full of praise, but it’s still weird to see a car posting 35-times stronger sales in the USA: 6,004-171 in June. June 2010 sales of other niche automotive products are in the charts below. 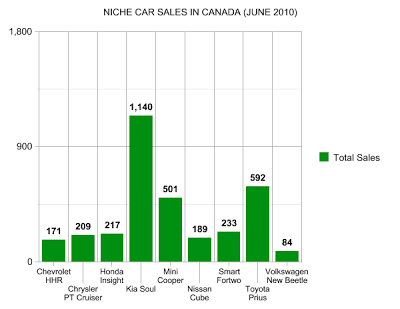 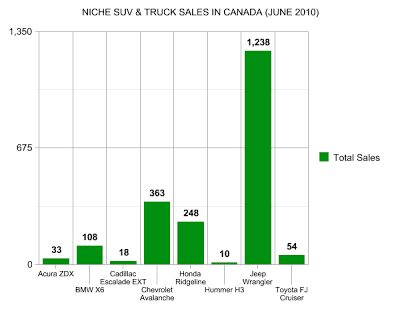