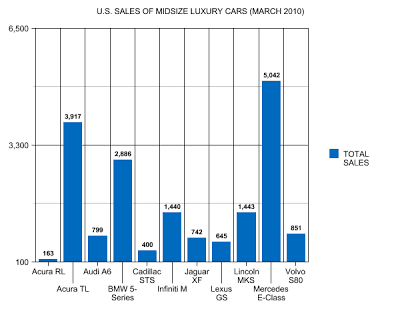 Home
All Vehicle Rankings
Passenger Car Sales
Midsize Car Sales
Midsize Luxury Car Sales
As a second-tier competitor in a group of significantly more expensive machinery, the Acura TL continues to sell well in comparison. The Mercedes-Benz E-Class, which starts at $48,600 for the E350, is still selling at a furious rate: over 5,000 in March. The Acura TL, some $13,000 cheaper, outperformed its more expensive sibling, the Acura RL, at a rate of 24-1 in March.
It’ll be interesting to see how the Cadillac XTS fares once it replaces the Cadillac STS and Cadillac DTS. The STS, seen in the Graph below, barely registers in the minds of most midsize luxury consumers. The Jaguar XF, Lexus GS, Volvo S80, and Audi A6 are other sub-1,000 unit/month cars, too. No doubt the Mercedes-Benz E350 and E550 Coupe help push the Benz’s total upward. The BMW 5-Series is also aided by an extra bodystyle. But the wagon version of the Audi A6 doesn’t propel it toward greatness in the U.S. Marketplace.