As The Good Car Guy continues his wonderings on the lack of Buick Regal success in North America, the LaCrosse and Lucerne continue to do alright. “Alright” must be put in context, however. The much, much, much less expensive but similarly large Chevrolet Impala out-sold the whole Buick division in August 2010 in Canada. The story was the same south of the border.

On to less discounted cars, the… well, is anything large lacking incentivization in the latter part of 2010? The words “large”, “car”, and “Canada” go together about as effectively as the words “soccer”, “World Cup”, and “Canada”. Discounts can’t stem the tide at Chrysler. Sales of the 300 fell 83% in August in Canada. Dodge Charger sales dropped 34.8% last month in Canada. Nissan Maxima and Cadillac DTS sales dropped, too, but the Ford Taurus and Toyota Avalon posted improvements.
In the large luxury car segment, BMW’s new 7-Series and the 2011 Audi A8 conquered their most direct rival, the Mercedes-Benz S-Class. Mercedes, however, continues to hold the large luxury car lead year-to-date in Canada, even if CL-Class sales are paired with the S-Class here. Jaguar XK sales rose 136% compared with August 2009 levels, but the XK was only Jaguar/Land Rover’s fifth most popular nameplate in Canada last month.
Details on Canadian sales of the whole large car collection are in the Graph below. 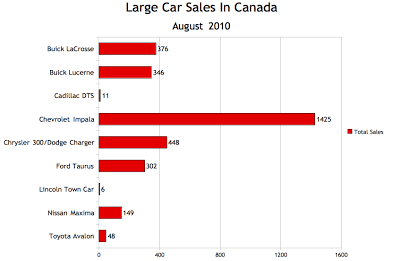 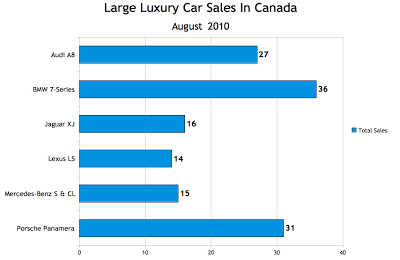