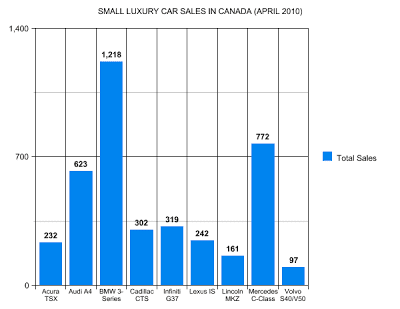 Home
All Vehicle Rankings
Entry Luxury Car Sales
What’s new, BMW sold a whole bunch of 3-Series sedans, coupes, convertibles, and wagons in Canada in April. Wow, sounds an awful lot like March of 2010. In fact, it sounds an awful lot like something we’ll be hearing in April of 3010.
GoodCarBadCar.net is certainly of the belief that BMW deserves customers. But it still makes for an awfully unsurprising reveal of the Entry Luxury Car Sales Graph each month. Better than winning for BMW must be the fact that BMW beat itself: sales of the 3-Series are up 22.8% from April of 2009. The C-Class Benz, Audi A4, Cadillac CTS, Lincoln MKZ and Acura TSX all improved on their April 2009 totals, as well.