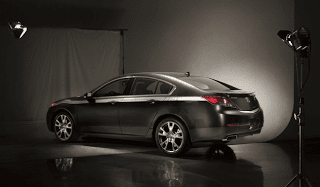 Of the 16 cars in the first table below which were capable of posting year-over-year sales declines, 11 did so. From the Acura CSX – a car we now know will become the even less fortunately-named ILX before too long – to the now defunct Volvo V50 (which did not record a single sale in November 2011) sales were down last month.

As proof that percentage declines, though deserving of attention, are not the whole story, consider the fact that BMW’s 3-Series was down 26.6% compared with November 2010 yet was still the most popular small/entry luxury car and the best-selling premium vehicle in Canada.

You can find monthly and yearly Canadian and U.S. sales figures for all these models by accessing the dropdown menu in the top right of this page. Last month’s edition of this post is worth checking out, as is the November U.S. version. Keep scrolling for a look at Canadian sales figures of larger and/or more expensive luxury car sales.

The much less expensive Acura TL was infinitely more popular than the Acura RL and also more successful than the 5-Series and Mercedes-Benz duo. Year-to-date, the E-Class/CLS-Class tandem tops all opponents. The Acura is 70 sales ahead of the BMW through eleven months. Acura Canada sales are down 11.8% this year but the $39,490 TL is up 6.8%. Presently, the TL can be leased over 25 months at an APR of 0.25% and Acura will pay the first $1000 worth of payments. 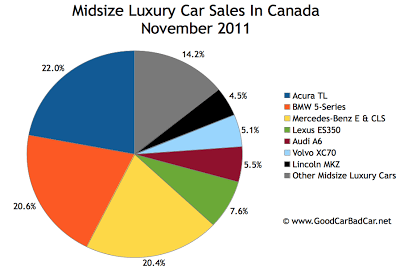