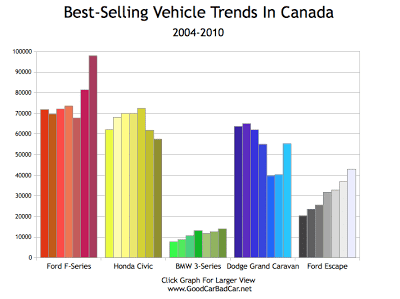 Home
Auto Brands
BMW
Rather than enter in to some great exposition on what the Graph below means, today it’s your turn to analyse and observe. What you’re looking at is a chart depicting the Canadian sales trends over the last seven years of 2010’s best-selling truck, best-selling car, best-selling luxury car, best-selling minivan, and best-selling SUV. From left to right, with each model, you’re seeing the yearly totals from 2004 through 2005, 2006, 2007, 2008, 2009, and 2010.

There have been peaks and valleys. Large fluctuations in the overall Canadian new vehicle market have resulted in huge swings for Canada’s most popular vehicles. This chart lays puts much of the pertinent information on the table.