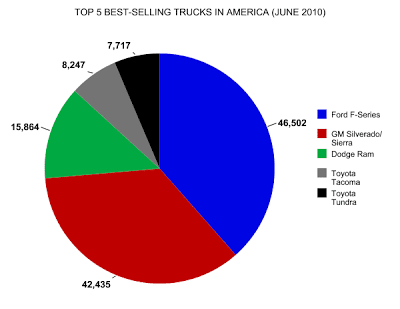 Month after month, year after year, the Ford F-150 and its heavy duty brethren combine to out-sell the opposition with ease. In times when the Chevrolet Silverado was the better truck, the Ford F-Series sold with more success. When Japanese competition was the newest hottest thang, the Ford F-Series was the best-selling truck in America. To console General Motors and Dodge, it would be interesting to see daily statistics. But then, what if there wasn’t even a day in June 2010 where the Ford F-Series was toppled? That’d hurt.
A Graph with all the necessary numbers on America’s best-selling trucks is below. Keep in mind, the Chevrolet Silverado is responsible for 30,994 of GM’s full-size truck sales.