It’s not clear to me how General Motors would go about phrasing it – I haven’t Googled anything to see if they already have – but one way or another, GM sold more full-size pickup trucks in the USA than Ford did in 2009. The year ended well for Ford, but overall, sales of the F-Series were off by nearly 20% compared with ’08. Sales of Chevy’s Silverado plummeted 31.9%. GMC’s Sierra total was down 33.6%. Combine those two vehicles, however, and the Ford F-Series isn’t #1.
For official reasons, Ford will still say they have the best-selling truck in America (which they do) while also possessing, in the F-Series, the best-selling vehicle of any kind in America. Keep in mind, sales of the Toyota Camry reached 436,617 in 2008. In other words, the Camry sold at a greater rate in ’08 than both the F-Serie and GM’s pickups did in ’09. In the Graph of Sales Stats below you can check out the Year End figures for the Top 5 Best-Selling Trucks in the USA. Car and SUV figures can be analyzed here and here. 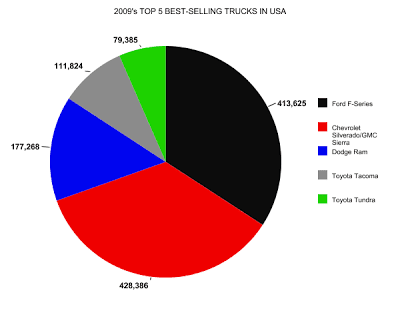