On the other side of the ledger, Toyota was afflicted with a case of the summer blues last month. Although either Toyota pickup truck, the Tundra or Tacoma, out-sold the GMC Canyon or Chevrolet Colorado individually, the combined efforts of GM’s two rather unsuccessful small pickups were enough to keep Toyota off Canada’s Top 5 Best-Selling Trucks list in August. It happened in May, too. Toyota’s “truck” division, which includes the 2011 Toyota Sienna minivan and all Toyota SUVs, dropped 6.8% compared with August 2009. This Toyota Canada truck flop in August 2010 follows a sales drop in August 2009 and August 2008, as well.
Dodge Ram sales improved substantially in August, up from 2,870 in August 2009. GM’s pickup sales fell from their individual totals of 4,983 (Chevrolet Silverado) and 4,857 (GMC Sierra) last August to this past month’s 4,116 and 4,019. 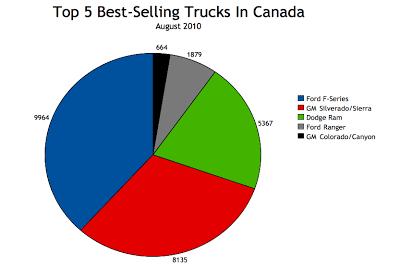