Interference from foreign brands has been negligible. The Nissan Titan and Honda Ridgeline have hardly put up a fight. One class down from the volume leaders is now a place dominated by the excellent Toyota Tacoma. But that Tacoma out-sells the truck that should be Toyota’s pickup volume leader, the Tundra. Truthfully, even the Dodge Ram or Ram Pickup or whatever you wanna call it is scarecely noticeable given the glow Americans afford Ford’s F-Series and the two pickups from General Motors. For the record, the GMC Sierra was responsible for 9,360 of 38,978 GM full-size trucks sold in April. 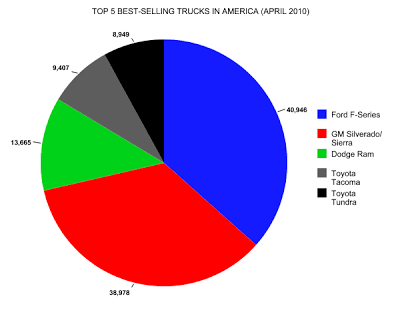