Chevrolet Silverado sales were up 5.1% to 34,084 in August 2010. Team those sales with the GMC Sierra’s total – 11,640 – and you have a pretty successful pickup tandem. Toyota Tacoma sales fell dramatically in August, down from 12,547 in August 2009. The Toyota Tundra didn’t suffer as much, but in a month where its main domestic competitors from General Motors and Ford managed to increase sales from August 2009 levels, the Tundra’s 4.8% decline sucks.

Dodge posted an 8% improvement on August 2009 Ram sales. The pie chart of America’s Top 5 Best-Selling Trucks tells the story, so scroll down for the Graph. 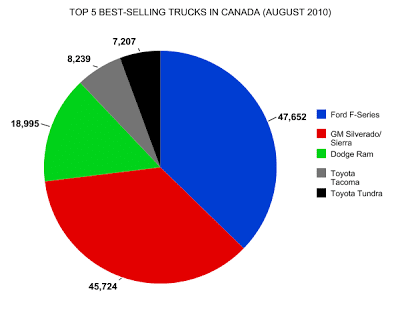