There’s not a bone in your body that’s surprised to see the Ford F-Series taking a significant bite out of this Sales Stats pie chart. July 2010, like almost every other month going back to the dawn of the Roman Empire, was a month in which Canadian pickup sales were dominated by the Blue Oval. So rather than analyze the July 2010 figures, let’s have a look-see at what General Motors would need to do in order to take 2010’s Best-Selling Truck In Canada award.

Through the end of July, Chevrolet Silverado sales stood at 24,103. Although that’s a 41% increase over last year’s first seven months, it’s less than the GMC Sierra’s total. Sierra sales are up 48% to 26,626. Thus, GM’s pickup total through July 31st of 2010 is 50,729. Ford F-Series sales haven’t risen nearly as sharply, but they were higher to begin with through July of 2009. Up 20.3% so far this year, Ford’s total is 56,314. A gap of 5,585 is probably impossible to make up in the next five months, one of which is nearly two-thirds over. To do so, however, General Motors’ trucks would need to out-sell the Ford F-Series by 1,118 each month. GM’s July deficit was 1,631.
At least GM’s mission isn’t as difficult as Toyota’s or Dodge’s. The Toyota Tundra hasn’t stolen the pickup market the way Toyota’s Camry took over the sedan market in the 90s. For Fiat-run Chrysler Canada, however, the Dodge Ram did out-sell the GMC Sierra and Chevrolet Silverado in July, just not when you add GM’s two trucks together. 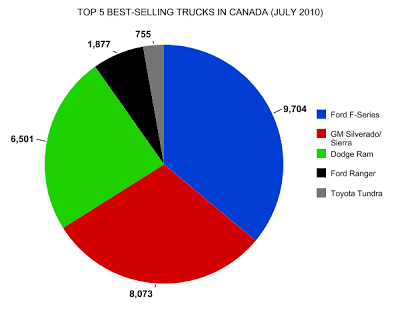