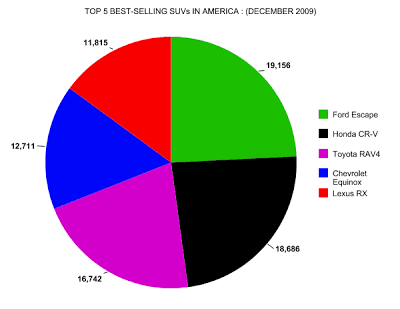 Home
Auto Brands
Chevrolet
Ford’s sales momentum, driven as much by its rejection of government money as by good product, helped the Ford Escape become the best-selling SUV in America in December. As you’ll see very soon in GoodCarBadCar.net’s 2009 Year End figures, the Ford Escape’s terrific push came a little too late to win the overall 2009 best-seller’s crown.
SUVs, you ask? Though the five vehicles you see below are no Jeep Wrangler-baiting, Nissan Xterra-crushing off-road warriors, they are linked in enough ways to fall under one heading. Nobody denies the classification of the Mazda MX-5 Miata as a car; nor would anyone deny the car-like qualities of the Buick LaCrosse. Those two vehicles have a lot less in common than a Ford Escape and a Jeep Wrangler. Thus, labelling everything crossoverish, SUV-like, and cute-uteesque as an SUV for the purposes of this Graph must be accepted. Here are the Top 5 Best-Selling SUVs in America for December of 2009. Check November’s Sales Stats here.