We’re closing in on winter solstice, yet the Pontiac Solstice is dead and the Chevrolet Equinox is selling like southern-baked hotcakes in cold Canada. Ford has escaped the autumn doldrums with profitability, sales success, and the best-selling SUV in Canada, the Escape. Of course. And Japan’s dominators, Toyota and Honda, come at this Top 5 from different angles; one with its most inexpensive SUV and the other with its most luxurious. South of the border, Toyota paves the way with luxury and low cost while Honda uses its least-expensive SUV to forge its way to number one. Compare and contrast, if you will, the Graph below with the equivalent story from the United States. 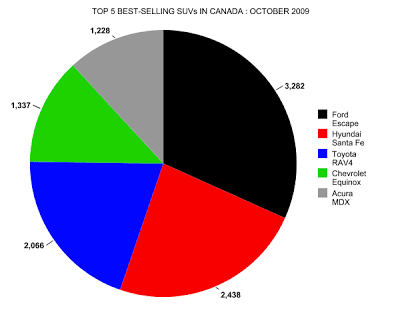