Although The Good Car Guy is pleased to see two Good 12 Supersize members catching on in the #9 and #10 spots, congratulations must be handed to Dearborn for selling the 2010 Ford Escape like a brand spankin’ new hotcake. Fresh out of the oven. In the prime of its career.

In fact, the Ford Escape almost certainly features the oldest architecture of any SUV in the Top 10 Graph you’ll see below. Yet last year’s best-selling SUV, the softie crossover that is the Honda CR-V, didn’t really come close to the Ford Escape in April. The much newer and supposedly hot-selling Chevrolet Equinox is way, way back. Get this, in a few days when a Graph is posted on GoodCarBadCar.net showcasing more than a dozen small SUVs/crossovers/CUVs, combined sales of the Chevrolet Equinox and its twin, the GMC Terrain, will still be about 3,000 units less than the Ford Escape’s total.

Half of the SUVs in April’s Top 10 are known as domestic vehicles. That’s better than the 40% in the Top 10 Best-Selling Cars for April, but still strange in what was at one time a domestic stronghold. 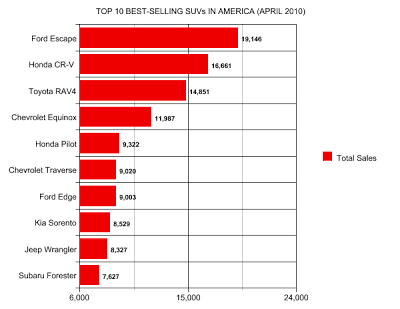