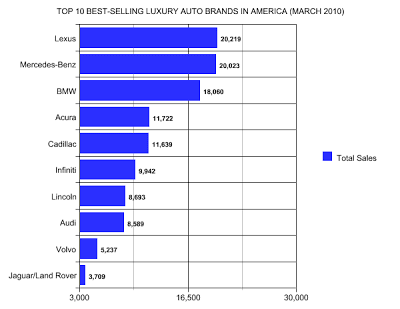 Home
Top Level Reports
Sales By Brand
Auto Sales By Brand
Lexus charged back to the front of the U.S. Marketplace in March with sales reaching 20,219, barely ahead of Mercedes-Benz. Climbing around 7,000 units from February is one thing – a 36.5% gain over March of 2009 is more noteworthy.
Is the Japanese giant struggling with Recalls and poor public perception? Apparently not. The Toyota Camry was America’s best-selling car in March while the Toyota brand sold more vehicles than any automaker during March’s 26 selling days. Now comes news that Lexus beat out all other luxury players. Things that make you go, “Hmmm”.
Of all the brands in the Graph of Sales Stats below, only Jaguar and Volvo posted a decline in sales when compared with March/2009.