Before Honda gets too excited about the status of the Accord in the two most recent best-selling cars lists, it’s worth paying attention to the sales pace. At this rate, there would be fewer Honda Accord sedans, coupes, and Crosstours sold in 2010 than there were in 2009. Thankfully, Honda Accord sales are doing better at this time of year than they were in ’09 and the best car sales months are yet to come.
Newer: Top 10 Best-Selling Cars In America – March 2010
Nonetheless, Honda’s true gratitude must be directed toward Toyota. The world’s largest automaker lost about one-fifth of last February’s Toyota Camry sales. That’s not good. Toyota Corolla sales were steadier, but they weren’t level. Indeed, “level” Toyota Corolla sales would’ve been bad enough. Remember how bad the economy was in early 2009? Toyota sales were down 40% in February of ’08.
General Motors can be pleased as three models made it in to the Top 10: the Chevrolet Malibu, Chevrolet Cobalt, and Chevrolet Impala. Keep in mind, the Honda Accord’s total includes 2,432 Accord Crosstours. 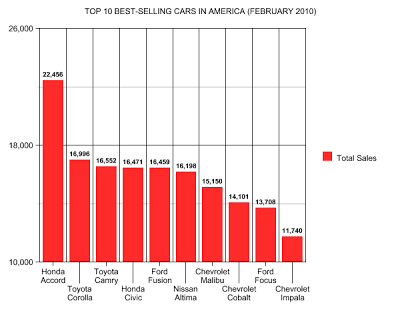