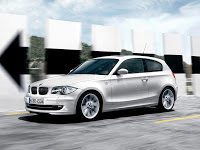 New car sales in the UK were down 8.9% in September, a number that’s affected by the Brits’ own Scrappage Incentive Scheme. UK new car sales are up 7.8% for the calendar year, however.

There’s no need to bother comparing the figures below listing the UK’s best-selling cars with the American or Canadian counterpart. For context, nonetheless, consider a few simple facts. The SMMT expects the UK car market to be about 2,000,000 units strong in 2010. In the United States, Ford alone – not the whole of Ford Motor Company but just Ford – sold 1,304,748 in the first nine months of the year. Add to that 1,638,544 General Motors sales in the USA through September 30th and you’ve got your context.

The Top 10 Best-Selling Cars in the United Kingdom in September 2010 are as follows.

#10 – BMW 1-Series: 5896
The 1-Series range delivered to North America is very limited. In the United Kingdom, for instance, the 2010 BMW 1-Series range includes the coupe and convertible but starts out with three and five-door hatchbacks.

#9 – Ford Mondeo: 6075
Heard of Ford Of Europe’s cars getting North Americans excited? The 2010 Ford Mondeo is one such car that ignites passion from Detroit’s domestically disenchanted. Good-looking and pleasant to drive, the Mondeo isn’t even available as a sedan saloon in Great Britain. Hatchback and wagon lovers only, please..

#8 – Peugeot 207: 6918
Multiple bodystyles (including a hardtop convertible and a wagon) help make this small Peugeot a popular car in a whole bunch of markets. But if you think this 207 is small, try the 107, a Peugeot hatchback that shares everything but its badge with the Toyota Aygo and Citroen C1

#7 – Mini: 7187
Mini’s portfolio is about to be broadened with the $22,350 Countryman SUV/CUV in the USA, but in the UK, the basic Mini already possesses a greater model range. For starters, there’s a diesel. There’s also the 75-horsepower Mini First, 98-horsepower Mini One, and the fuel-starving Mini One Minimalist.

#6 – Volkswagen Golf: 7228
Sales of the sixth-generation VW Golf stood at 44,399 in the UK through September 2010. This compares with half that many in the USA so far this year, as reported on GoodCarBadCar.net this morning.

#5 – Vauxhall Insignia: 7250
Far more successful than its long-lost American brother, the Buick Regal, the Insignia is easily the largest car in the UK’s top 5 most popular cars in September 2010.

#2 – Vauxhall Corsa: 14,249
Could General Motors’ small car presence in North America ever replicate what goes on in Europe? The 2012 Aveo is surely handsome, but fuel prices would have to skyrocket for the Aveo to overtake the Malibu, let alone the Honda Accord and Toyota Camry.

#1 – Ford Fiesta: 19,078
We’re apparently still waiting on proper supply levels in North America. Britons aren’t hindered when they wish to acquire a new Ford Fiesta. Only 3050 were sold in the United States in September.