In September, dominating Japanese automakers, not surprisingly, dominated the best-selling cars list in the USA. You’ve already seen how American manufacturers control the pickup truck market – these are the Top 5 Best-Selling Cars In America for September 2009. In the Graph below, the Sales Stats show one American car. Inspect the bracketed section more closely and you’ll see that the one American car suffered a huge decline in sales compared with September of 2009, almost allowing a fifth Japanese car to knock it out of the Top 5. That car? Why, the Nissan Altima, which was sold to American consumers 12,149 times in September.

Don’t be too saddened by the state of domestic manufacturers, however. The Ford Fusion (10,834) and Chevrolet Malibu (10,479) cracked the top 10 in September, along with the Toyota Prius (10,984) and Volkswagen Jetta (9,568). And the 11th, 12th, and 13th best-selling cars in America were the Ford Focus, Pontiac G6, and Chevrolet Camaro. Moreover, those four Japanese cars in the Top 5? They’re manufactured right here in North America. 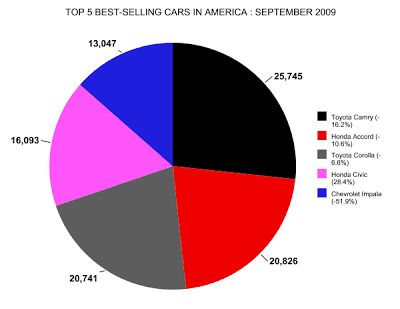